Human brain is acknowledged to be the most complex structure known to the mankind. Technology has advanced to such levels in the recent years that it has helped the mankind learn more about it in the last two decades than in the entire human history.

One of the biggest contributors for such progress has been the ability of various techniques in neuroscience, which can detect activity within the human brain without invasive surgery. It has also helped the human brain to be mapped in minute details.

Despite such progress, knowledge about fundamental workings of the brain is still a mystery. Very little is known about mechanisms underlying phenomena like thinking, memory, emotions, attention, consciousness, sleep, dreams, multi-tasking, etc.

The core reason for lack of such fundamental knowledge is that like other sciences of mind and brain, neuroscience does not study the brain as one integrated system.

This simple and fundamental fact is not taken into consideration by neuroscience, which studies various aspects of brain’s workings in greatest of details, but does not see it as one integrated system.

It studies the brain by breaking it down into components, for which it follows a linear approach.

Most components of the brain are interdependent and do not work in a linear fashion.

What is needed is a holistic approach of a goal-driven system that studies how brain’s components interrelate and interact with each other, while interacting with other external systems and components, which is called systems thinking approach.

Secondly, different parts of the brain work together in goal-driven activities, implying that they work in causal manner, whereas neuroscience relies mainly on correlations. Correlations do not imply causation. To understand and control the world around us, it is important to know what causes what. Once we understand the causal connections of a system, we can explain what has happened in the past, predict what will happen in the future and intervene to seek the outcomes we desire.

Based on the above points, one can derive that the best way to understand how the brain works is through a causal account of a single integrated system (without which, neuroscience is like groping in the dark).

The first account to successfully decode the brain as one causal system has resulted in the development of Dichotomized Operating System Model, a functional model which reveals an operating system (OS) of the brain consisting of multiple hierarchically interconnected goal-driven mechanisms and processes that form what we collectively call “mind”.

Natural Selection works on the premise that nature selects, i.e. favours, organisms for survival based on their inheritance of characteristics that allow them to survive and reproduce better than other organisms of their species that do not have such characteristics.

Continuous addition and optimization by favouring better and better survival and reproduction characteristics in every passing generation for a period of millions of years has resulted into organisms accumulating a high number of highly optimized characteristics favouring survival and reproduction based on their environments and ecosystems, which has been responsible for the human body to develop in highly optimized manner (more Optimizing Aspect of Natural Selection).

According to the DOS model, the process of natural selection is not only responsible for physical development, but also mental development, as it has the same physical basis and is a part of the same goal-driven activity.

Thanks to the capability of neuroscience, one can map such mechanisms to their respective processing areas (neural substrate) using its capability to correlate mental activity with its associated brain activity. Doing so can help in resolving a range of problems spanning from day-to-day life phenomena to diagnosing and treating mental illnesses and disorders in less cumbersome, more reliable and most importantly, fully conclusive manner.

Integrating the model can also make it possible to conduct transdisciplinary research, thereby connecting all mind and brain sciences (e.g. neuroscience to psychology) through the common grounds of causation. Such integration can be especially useful considering the fact that despite engaging in multidisciplinary and interdisciplinary studies, several multimillion dollar projects like Human Brain Project, BRAIN Initiative, The Blue Brain Project, The Human Connectome Project, etc. are unable to pool their findings, making it difficult to bring them to conclusive outcomes.

The fact that only two core components of the model are the driving force (hence the name dichotomized), and thus are sufficient to explain mechanisms underlying fundamental mind phenomena makes it easy for the common man to understand the model, and thus workings of his own mind, giving a new meaning to the term introspection.

Understanding purpose and workings of mental mechanisms can bring about revolution not only in sciences related to the human mind and brain, but human life as a whole. 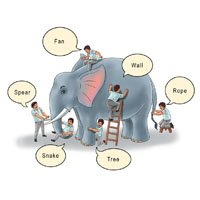