Both hemispheres of the brain are designed by the process of natural selection to make decisions on its ongoing interactions.

To optimize on resources based on the optimizing aspect of natural selection, the right hemisphere evaluates how significant the ongoing interaction is to its goals, proportional to which, it allots the amount of resources required to process it – higher the significance, higher the amount of processing resources and vice versa (more here).

To process information, the brain needs energy, which is fuelled by oxygen in the blood and thus, more communication requires proportionately more blood.

Based on the same, to process more communication, the heart has to beat faster to supply the increased amount of blood to the brain, which is proportional to the significance of the goal.

When a situation of high significance demands a decision to be made by a person in a limited time, e.g., when he/she is in immediate danger of life, the heart has to beat much faster to supply more oxygen and thus, more blood, as it has to reach the highly significant goal of survival in a limited time. The frequency and strength of heart beating in such a situation is proportional to its significance divided by the available time, which is handled by the non-conscious left hemisphere and thus, is not under direct conscious control.

As such mechanism was not known for thousands of years, the observation of beating of the heart correlating with mental events has resulted into a large portion of population having an impression that heart, which is just a pump controlled by the brain, is the seat of mind and emotions.

Such impression is so deeply ingrained in people’s minds that even after decades of familiarity with information processing systems and advancements in the sciences of mind and brain; the heart is still considered the seat of mind by many.

Based on the same, as thinking about a significant topic requires utilization of processing resources in the right hemisphere proportional to its significance, the metaphor of heart is used as a placeholder term for it (which is also the reason why heart is used to show significance in the matters of love and romance).

How deeply ingrained and ubiquitous such usage is can be demonstrated by following examples, where the word heart is used for the right hemisphere (followed by what they actually mean):

“He helped me from the bottom of his heart,” which translates to “His intention of helping me emerged from the contextual processing of his right hemisphere, and was not a mimicking behaviour to give an impression that he is helping me”

“He has a strong heart,” which translates to “The contextual processing in his right hemisphere is highly developed, which makes him mentally strong and confident in whatever he does”.

“He broke my heart,” which translates to “I had confidence (gained from contextual processing of my right hemisphere) that he will marry me, which didn’t happen. Now I’ve lost that confidence”

Other Usage: In our daily lives, we use terms like heart and mind, often interchangeably, which are actually placeholder terms for left and right hemispheres, as demonstrated by following examples:

“My brain says forget her, but my heart says give it another try.”

“I put my heart and mind into everything I do.”

In the above example, the word heart stands for the contextual right hemisphere and mind for the logical left hemisphere.

Note: This topic is explained in detail on Page 40 of the book Mechanisms of the Mind 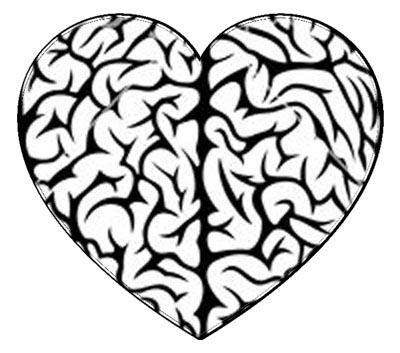