As explained in the Treasure Hunt analogy, the way son avoids other cars, people crossing roads, etc. and follows traffic lights, diversions, etc. on his own; the non-conscious left hemisphere processes preset interaction information (or parts of it) on its own. Such preset interaction information contains 1) repetitive, 2) random and 3) genetically stored information, which is detected by the left hemisphere on an ongoing basis.

After such distribution, the overall interaction information is processed to arrive at multiple decisions on how to handle it using direct and contextual logic processing by left and right hemisphere respectively.

For the same reason, the authority of finalizing decisions to execute is assigned to the right hemisphere by the process of natural selection.

Based on such authority; the right hemisphere judges which of such decisions are suitable for execution using simple logic. The left hemisphere contributes in the decision making process as and when preset data or complex logical processing is required.

Once the right hemisphere finds what it judges to be a plausible one out of the accumulated decisions, it finalizes the same for execution, which becomes its intention.Based on Monaural Radio Analogy explained in the post How Mind Emerges from the Brain, while making decisions, our “self” cannot differentiate how the processing is distributed between hemispheres and where decisions are made. 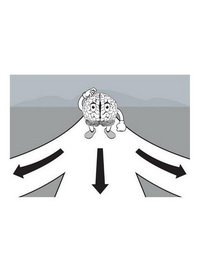