The simplest way to understand the basics of how mind functions in the brain is through “Treasure Hunt” analogy.

Treasure hunt is a game where each person or team attempts to be first in finding something that has been hidden using a trail of clues.

A father and his son are participating in the game of treasure hunt with the son at the driving seat of the car.

The son is good at thinking logically and executing efficiently, as he is young and physically fit. He avoids cars, people crossing roads, etc. and follows traffic lights, diversions, etc. on his own, but consults his old father, who is not as physically capable and as strong in logical processing as his son, but possesses wisdom derived from decades of experience of city roads, locations, their histories, dangers, shortcuts, etc., which he uses to decode clues for different destinations to guide his son on which path to take in the game of treasure hunt.

An example for the direct and contextual logic processing is when you are on a weight reduction diet and you see a delicious looking pastry, your craving for it is processed by your left hemisphere, it being the direct logic processor, against which, warning that if you eat the pastry, you will gain weight is processed by your right hemisphere, it being a contextual logic processor. Even when such contradictory thoughts are coming from different hemispheres, you do not know their origins, in the way voices of two singers are mixed and routed through a single audio channel in a Monaural Radio – see illustration.

For the same reason, based on the optimizing aspect of the evolutionary process6, any task that becomes sufficiently repetitive in the consciousness generating right hemisphere moves to the left hemisphere, which does not generate consciousness, thereby freeing up the right hemisphere to attend to other tasks, which we call multitasking7 (e.g. executing multiple tasks while driving a car).

Repetitively transferring processing of conscious data of an interaction to the non-conscious part of the brain plays a major role in habit formation. It is also the reason why we are not consciously aware of many tasks that we do repetitively, e.g., balancing the bicycle while riding it.

This way, the human brain is designed to optimize processing of interactions by distributing them (or parts of them) between left and right hemispheres (called lateralization of brain functions), which is one of the core reasons why it has two hemispheres8.

(Source – Mechanisms of the Mind by Parag Jasani) 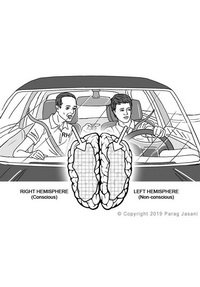